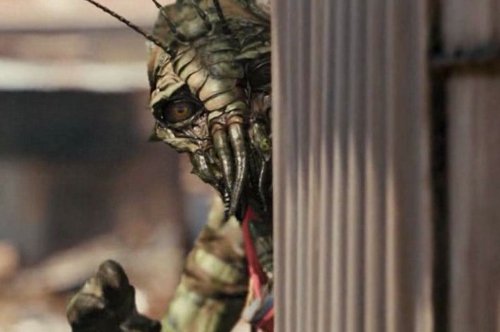 This movie will just shock you beyond imagination. It’s not just sci-fi as is expected though the movie is about aliens on Earth. And I would give full points to the director Neill Blomkamp, who is also the writer of the project, for turning an entire genre on its head and giving us a moving story leading us to question what exactly is human and what alien.

The movie is about an area in Johannesburg, named District -9, a slum where aliens stranded on earth have been placed. More than a million of them live in this area under horrible living conditions for 20 years and under the rising pressure from the general population who finds them to be a menace, the government decides to relocate them. The movie is made in a documentary style of filmmaking where the camera follows the lead character Wikus Van De Merwe (Sharlto Copley) while he starts off the eviction of aliens also referred to by a derogatory term, ‘prawns’. During the first day you see a lot of cruelties and the zone looks more like a war ground than a slum. Prawns are shot and beaten up without even a blink of an eye because they have no rights. During the first day Wikus is infected with a solution which starts turning him into an alien. Confused and scared out of his mind, this is the point of the movie where you feel the most disturbed as instead of helping him, you see him being subjected to experiments, by his own company. In a scene, where he is being made to test alien weapons (triggered only by alien DNA) you see him shattered as he is forcefully made to shoot a prawn. Scared for his life, he runs away, becoming a fugitive from his own race. What is touching to see throughout is the love for his wife, who he calls incessantly, pleading her to wait for him. The only help or comfort he receives is from a prawn called Christopher Johnson and his son, who promises to turn him back into a human if he could get back the solution. It’s moving to see Wikus shift sides, turning from a simple, law abiding man to someone who is willing to do anything to get back what he had lost. Including killing and resorting to violence.

The movie works on many levels. The intricate plots and sub plots, the emotional moments between Wikus and his wife and Wikus and Christopher; all of them just blow you over. It’s not just sci-fi, even though you see hoards of aliens walking on screen, great action scenes, cool weapons, space ships and more. It’s a take on the human race and how afraid we are of anything abnormal, turning to violence as a means to hide our fear. It’s about the sanctity of life. It was amazing how, no one thought twice before cutting Wikus up into pieces for experimentation once they knew that he was soon going to turn into a prawn. He became easily disposable at that point of time. The most moving scene in the movie is the last one where he (at this point of time half human half alien) is going to be shot dead by a man who knew perfectly well that he wasn’t a criminal. But he moves to kill him nonetheless because he was different. At this point, the aliens domesticating the area save him because they saw someone attacking their own species. For me, that was the point of time when his transformation was complete, from a human to an alien because that is how he was accepted.

The movie can be described in one word. Awesome. And all the credit should be given to the director who has made something completely original and path breaking, in a miniscule budget and used a premise of a science fiction to tell a story that is so basic and human (or alien). Sharlto Copley plays Wikus, and does it brilliantly. His transformation from a simple, common man to a man who is cheated by his own race is so real that you feel his pain at every point of the movie. The screenplay by Neill Blomkamp and Terri Tatchell is brilliant, where the main plot is kept simple yet so many new elements (war weapons, human rights, xenophobia, exploitation, black magic) are added without disturbing the story at all.

Very rarely do we come across movies that make you sit and think about the world we live in. This one will do a lot more. Watch this one for the originality of thought and flawless execution making this one a pure pleasure on the eyes as well as mind.