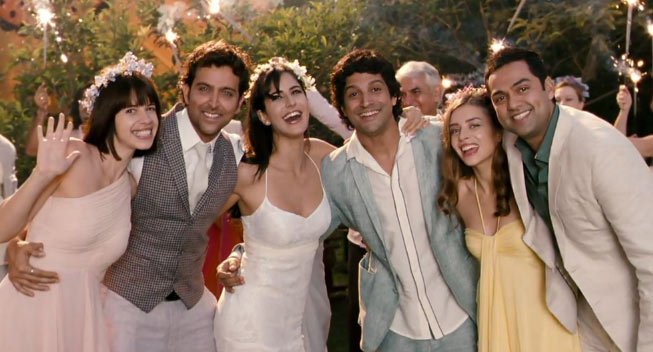 ‘Zindagi Na Milegi Dobara’ reminded me of one of those foreign flicks where the story is not about the story but enjoying the moments. It is also one of those movies that irritate me and my bro because everyone is so freaking rich and can go on a holiday to Spain!!!
These are two ends of the spectrum, in between which you have to find your own definition for ‘ZNMD’. Some will call it slow, others charming and a few others “too full of itself”, and sadly for once I can’t dismiss any of them. The movie is not your run-of-the-mill Bollywood fare for which I could say, “The editor should have cut off 30 min from the length.” It is actually a journey where each character opens up slowly, almost at a snail like pace . . . and sometimes at the cost of the audience’s patience. Nonetheless it gives you moments which are absolutely hilarious and also heart wrenching.
A bachelor trip for Kabir (Abhay Deol) with his ‘ishcool’ buddies Arjun (Hrithik Roshan) and Imraan (Farhan Akhtar) turns into something more as all three fight, fall in love and confront some past issues. Somewhere on the way they meet Laila (Katrina Kaif), fashion student, part time diving instructor and bohemian hottie. While Imraan charms her with his wit, it is the depressing Arjun who wins her heart. As I mentioned while watching the movie . . . ‘it is always the losers who make for better love stories on screen’. Kalki plays Natasha, an archetype fiancée who freaks out at the thought of her boyfriend Kabir spending time with another woman. There is nothing much for her to do and I was actually kept wondering as to why her talent was utterly wasted in this project.
So what is there in the movie that makes it special? Ironically, I would say the pace. The movie is like watching ‘Lonely planet’ with Hrithik, Farhan and Abhay. And the humour is completely random. Like there is a CCTV observing the three guys while they sit and talk utter rubbish. Observe ‘The mentally the sick’ episode or the men perform the Doordarshan tv theme and you will get exactly what I am talking about. The humour is the driving force of the movie, but it is not forced or arranged. It is something that is derived from the friendship the three protagonists share. While Farhan acts like the artistic, charming and funny ‘dil phek ashik’, Abhay is the grounded side kick. Hrithik’s character is somewhat of a shut briefcase till the second half where he gets kissed by Katrina Kaif. (I have a serious doubt that Susaane Roshan was given a special thank you note in the beginning of the movie for not objecting to it!) A surprise was how engaging I found the adventure sport scenes (other than the deep sea diving which was like watching Animal Planet). The sky diving was nerve wracking and so was the bull chasing.
Of the three men, Farhan comes through the most whether it is comedy or tragedy. The scene where he confronts his biological father Salman (Naseeruddin Shah) is heart breaking. Hrithik gets to do something new with his character. To play a guy so suffocating and still managing to be engaging and wide eyed ‘in love’ is quite a feat. Abhay in comparison has lesser to do in the movie. His complications are less apparent and he is given only a limited screen time with Kalki for the audience to actually feel anything about the relationship.
The songs blend well with the sequences. The locales are beautiful. And the people are even more so. With ‘Zindagi Na Milegi Dobara’, Zoya Akhtar proves to be a filmmaker who may not be the mainstream story teller but had a style which is truly her own.
I enjoyed the movie. It is not everyone’s cup of tea but watch it for the fabulous chemistry between the three men.
Share karo yaar... tumhe filmon ki kasam