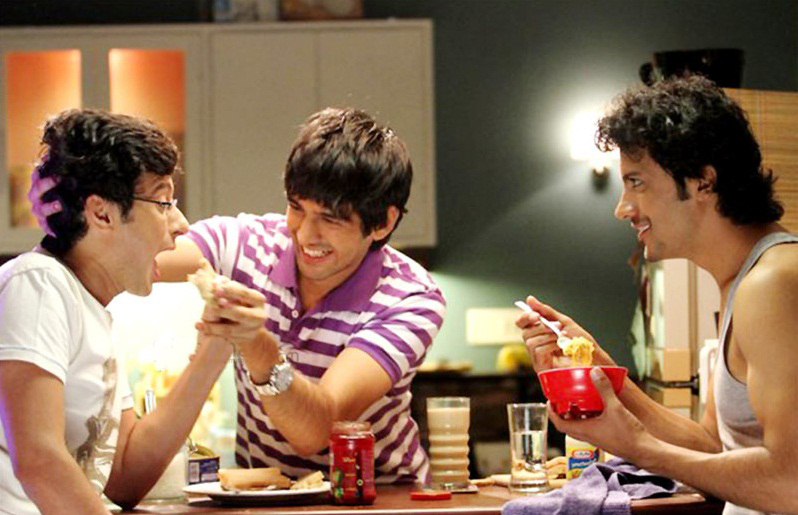 After hearing quite a bit about the first half of the movie . . . i thought it was time to pay it a visit. In my opinion, it is hard to portray emotions strongly enough without boring the audience a little. I may be wrong but it is an opinion. It is at this point where the movie ‘Pyaar Ka Punchnama’ both scores and loses. It scores because the fact that the three main protagonists have to get out of their respective relationships couldn’t have been made more clear.  It loses because more than half of the movie is spent to make this clear. But despite all the hiccups and the unnecessary songs, the movie makes for a very interesting and gripping watch.

Pyaar Ka Punchnama revolves around three friends Rajat, Vikrant Chaudhari) and Nishant AKA Liquid who live in Delhi/NCR and are all working in the city. Their lives are like that of any group of happy bachelors. Single and always ready to mingle, the day revolves around dhabe da food, beer and partying. Soon, Rajat starts dating Neha and soon moves in with her in an apartment near his old house. Chaudhari starts a complicated relationship with Rhea who already is  dating someone but soon breaks up with him. Liquid on the other hand remains ‘Friends’ with Charu … whose name I thought was Chalu at first. Quite appropriate I must add. Over the next hour or so, we see them going through frustrations of these different kinds of relationships.

The strength of the movie remains how in depth it goes into explaining the dynamics of the relationships of the three characters. Neha is the archetype dominating girlfriend who through the sheer power of her unknown viciousness sucks the joy out of Rajat’s life. The scene where Rajat vents out his frustration on Chaudhari is priceless. Is not just hilarious but also completely genuine. (I am saying it as a woman . . .) “Ladkiyon ke saath koi bhi discussion argument hota hain! Aur unse tum argument to kabhi bhi nahi jeet sakte”

Chaudhari’s character and his relationship remains the most underdeveloped. Rhea is the kind of woman who just forgets to breakup with her ex properly and still entertains his calls. The rest is quite predictable. But Liquid remains the most bechara of the lot. At one point of the movie I was actually discussing which one of the three is the biggest loser. Just after that Liquid waits for his ‘friend’ in the parlour for hours while she gets made up to meet her boyfriend. We got our answer!

“Ban gaya kutta” …. The song in the movie perfectly describes the movie. Watch it for wonderful performances by the three men, Kartik Tiwari, Raayo S Bakhirta and Divyendu Sharma. Divyendu is an absolute joy to watch. The first 15 min of the movie belong to him and only him. Among the women, Nushrat Bharucha who plays Neha is someone to watchout for. She has done a string of interesting roles and this movies sees her in a completely new light. Dayan hi sahi, she definitely has portrayed a girlfriend as no one has before this.

The unnecessary addition of songs and half hearted editing job makes it long but the movie is a definite one time watch.