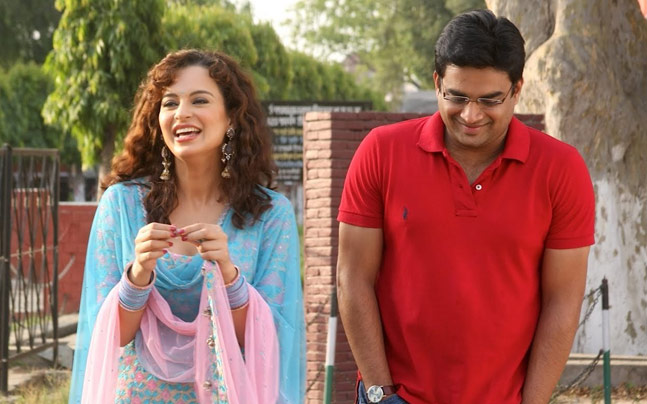 I feel like writing this review in Hindi … Par majburi hain iss sale keyboard ki. Try karungi to Sonia Gandhi ke speech lagegi. Lets get the important things out of the way first. Did i enjoy the movie? Yes. Should you watch it? Definitely. Rating bhi chahiye? I would give it 3.5 out of 5. 0.5 extra for the sheer colour and vivaciousness of the characters.

Tanu weds Manu has a very simple premise but a slightly more complicated storyline. Manu (Madhavan) is a NRI doctor who comes to India to meet his parents who force him to see girls for an arranged marriage. He sees Tanuja Trivedi (Kangna Ranaut) urf Tanu and falls for her. Tanu on the other hand is a complicated character. A rebel without a cause, she is what you may say is going through a permanent teenage. She is not fighting for women lib or her own rights or freedom. She just gets a kick out of shocking people and seeks disapproval from everyone, including her own parents. The entire plot is based on this very fact and a little on the rowdiness of Tanu’s boyfriend Raja (Jimmy Shergill). Manu is the good guy who always does the right thing, even at the cost of his own heart.

The movie is a joyride. It shifts base from Delhi to Kanpur to Lucknow to Punjab and keeps doing that throughout. And in the process we get to meet some really delicious characters. Like Tanu’s best friend Payal (Swara Bhaskar), Manu’s best friend Jassi (Eijaz Khan) and one must mention Pappi (Deepak Dobriyal) who plays Manu’s loyal confidant. There are many mothers and fathers and aunts and uncles, all played to perfection by every supporting character. While the interval leaves us in the expected situation of the heroine asking the hero to stay for her marriage, the second half kind of dwells on making her realise her own stupidity.

But this is not Kuch Kuch Hota Hain. Nobody owes anyone anything. When Tanu finally decides that Manu is the right man for her the movie doesn’t end. It leads to a scene where the perspective groom Raja takes out his pistol, quietly placing it on the table and telling her father to go and prepare for the wedding. And only a launda from Lucknow could pull of that scene. And Jimmy Shergill does this perfectly. He slips into the character so well that you wonder why he just doesn’t get good roles.

Most of the film time is actually spent building up on the relationship between Tanu and Manu. The dialogues are a treat. Really. Sample this…’dhobi ki kuttiya ban ke reh jayega’ or the charming ‘main to manu ki wajah se rukh gayi nahi to darti to main apne baap se bhi nahi hun’!!!! WAH!

Coming to the main leads. Kangna is as demented as Tanu. Her voice which is one of her biggest low points works for her in this movie, as a character who is not supposed to be all sorted out and sophisticated. Madhavan is mostly quiet throughout the movie. But his outburst scene where he confesses his love to Tanu is completely heart wrenching. I think I have already said enough about Jimmy Shergill. Deepak Dobriyal is the gem of the movie and Swara Bhaskar is a real find.

The movie doesn’t have too many songs. All the songs by Krsna are a treat though. I would have killed to listen to ‘Sadi Galli’ for more than just a min. Director Anand L Rai paints you a colourful canvas with ‘Tanu Weds Manu’ full of music, masti and dhamaal. Go have fun. (You may find the second half a little long but i though it increased the tension on screen and keeps the suspense on till the last moment)