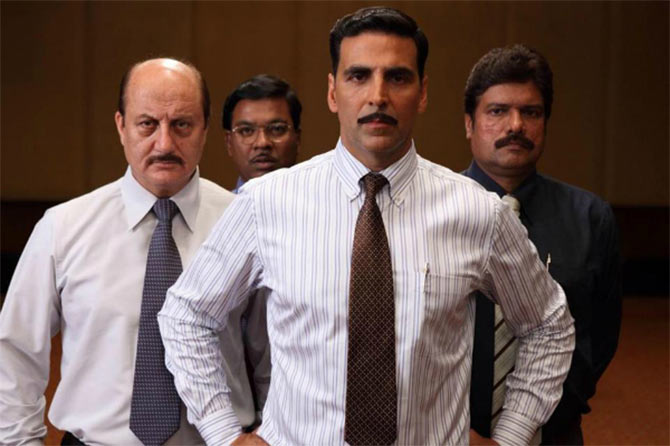 As I watched Neeraj Pandey’s film ‘Special 26’, I tried but I could not get my mind away from one of my favourite heist films ‘Ocean’s Eleven’. Fear not, the two are in no way similar but both have that one thing that is most important to a film in this genre – A formidable opponent. Daniel Ocean had his Terry Benedict and here our own Ajay Singh (Akshay Kumar) has the ever so reliable Manoj Bajpai as CBI Officer Wasim Khan.

The story revolves around a group of four, (Akshay Kumar, Anupam Kher, Kishore Kadam, Rajesh Sharma) who carry out raids as fake CBI and Income Tax officials through the country. Soon the real CBI led by Wasim Khan is entangled in a classic case of Chor-Police, with the police having a lead on the Chorand waiting intently to pounce. How the story pans out is of course a joy that I will let to experience on your own.

The story is a thrilling ride, where every side gets more than enough room to engage the audience in their journey. Melodrama is kept to the minimum, with noone using family, cancer ridden wife or any other emotional excuse to indulge in this kind of kaand. The four con-men do it because they want to do it. Period. Again going back to ‘Ocean’s Eleven’ where the character of Tess (Julia Roberts) was rebuffed with charm at the request of leaving the ‘business’. Here unfortunately we have a less charming Priya (Kajal Aggarwal) as a soon to be wed love interest of Ajay. I guess a few compromises can never be avoided.

All actors in this ensemble cast are brilliant. Akshay Kumar is straight faced through the film’s length and does a good job at being so, but it is Anupam Kher who gives the audience two different characters to enjoy at the same time. While his ‘Sharmaji’ is a bumbling father of a dozen, he turns into an intimidating P K Sharma as soon as he puts on a formal shirt as a fake official. Jimmy Shergill plays Inspector Ranvir Singh and along with Divya Dutta does a fine job at playing the local police. I would have liked for the both of them to have a lengthier role but it would have been unfair to the script. Manoj Bajpai is one of the gems of this story, playing the role of Wasim Khan with edginess and humour which only natural actors are able to impart to a serious role. Even though the film is essentially not a comedy, there are moments of pure situation humour that make you shake your head in disbelief.

All this said, the film belong not so much to the cast but to the writer-director Neeraj Pandey who has written a script which keeps everyone guessing to the very end. And to the Production Design team of the film for creating the India of 1987 for us on-screen. Open roads, old billboards, old currency notes, the film feels like a look through the photo album, only no one is turned into a caricature (remember ‘Action Replayy’?) Also, how Pandey shot on the roads of Connought Place with only a few Premiere Padminis and Marutis driving on the busy junction is beyond me. The editing by Shree Narayan Singh is tight and apart for the two songs there is absolutely no unnecessary scenes in the film.

‘Special 26’ is a film which deserves to be seen. In a industry of 100 crore openings where only big names and item numbers sell tickets, often we forget what the industry stands for – Entertainment. This is an out an out entertaining film which just happens to not compromise on quality. Watch it. And make others watch it too.