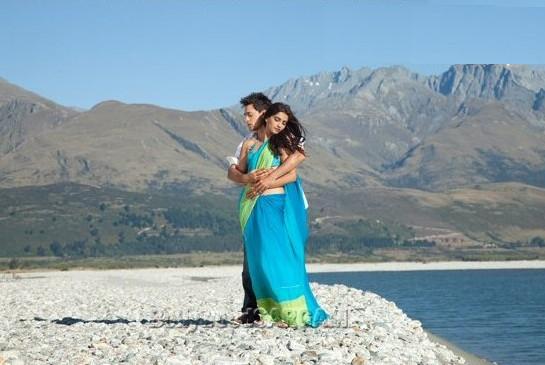 After watching the movie, as I went out of the theatre I said to my friend, who had been kind enough to accompany me to the movie hall, “Those ‘yeh who, wagera wagera’ scenes were nice na?” “Yes,” she replied. And I said, “It would have been better if there were other things too, other than just funny dialogues.”

The problem with the new breed of directors, directing innumerable movies for the Johar and Chopra clan is that they had an idea. And somehow while they succeed in getting the right music, cast and costume for the idea, they fail to generate a script. I wouldn’t even go to the very obvious flaw in the story telling, which is the use of narration in the backdrop, which makes the movie seem very average from the very start. Will discuss the rest of the flaws after the story.

Imran, who plays Jay in the movie is an archetype Romeo who doesn’t believe in love. Why? We are only informed in the end that there are family issues in his childhood (too late). Simran (Sonam Kapoor) on the other hand is a pink loving, love obsessed female. Again, very unidimensional. She has a perfect boyfriend Raj (Sameer Dattani) and they live in their boring colour coordinated world and drink on the weekends. Simran’s perfect life is turned upside down by the cynical Jay who hates everything that she loves and makes no effort to hide his contempt for love. They spend a lot of time together. Simran gets confused. Falls in love with Jay. Jay doesn’t get it. Yeh Dooriya….kaisi dooriyan. Sad scene sad scene sad scene. Jay figures he is in love. I’ll leave the rest as a surprise (in case you haven’t guessed it yet).

Ok. So, back to the point. The problem with Punit Malhotra’s debut vehicle is that he was so busy making fun of every romantic blockbuster produced in the last 15 years that the audience sometimes doesn’t get whether you are sitting in a spoof or an original work. The extravagant romantic songs which are picked out from various movies, the chiffon sarees and the unending jokes on older romantic flicks, just reach a saturation point very early and one can’t be squirm from the inside when you see the fake hero-heroine act ala Shah Rukh and Kajol in every movie. A lot of the movie’s length is wasted on this and though is it funny for the first 5 minutes, it is not for the rest. This is exactly what I was saying about the younger breed of directors. Punit Malhotra has obviously grown on the Yash Chopra and K.Jo movies but what surprises you is that he uses movies which are not more than 6 years old and makes caricatures out of all of them, instead of taking a shot at some actual classics. He is allowed the whole DDLJ (Raj, Simran) angle (Though I personally think he should be burnt alive for making such a crude joke out of it). But the rest of the movies he makes fun of (Mohabattein, Kabhi Kushi Kabhi Gham, Kal ho na ho, Dil to pagal hain, Dil Chahta hain, Rab ne Bana di Jodi etc) are just not even classics that you pull a spoof on them. And this is the weakest link in the entire movie. You don’t know whether it is a spoof you take lightly or a full fledged romantic flick that you take seriously.

Imran Khan is extremely good in the movie. The guy has got everything to make it really really big, only if he chooses his movies more carefully. If this movie works, its only because of him. He is funny, charming, jerky and o my god … the moments when he is depressed in the movie, he has such a heartbroken look on his face that you feel like giving him a hug yourself. I forgot to mention how absolutely good looking he is. Sonam A Kapoor, is just busy looking pretty in the flick, though she fails at that because Imran is standing next to her throughout and she fades in comparison. But she is not bad. But she definitely needs to work on her expressions a bit. One of the best parts of the movie is the form of Kavin Dave who give some immensely rib tickling one liners. The director makes a joke out of Sameer Dattani, with a ‘I am such a dumb man-child’ act. In one scene when Simran tells him, “Tum jaante nahi ho ki mere saath kya kya hua hain.” He says, “Main janana bhi nahi chahta.” One of the surprise packages of the movie is in the form of Bruna Abdullah, who has a small cameo. She is extremely funny and I am hoping that the ‘dumb chick’ act is not for real. But she is a treat for the eyes in the few minutes she has in the movie. Definitely has more spunk than Sonam.

About the movie…. The songs, except for the melodious ‘Bin tere’ are all nonsense. Pretty clothes, pretty locales and pretty people. But don’t you expect them from each flick? Watch the movie for Imran Khan. He may hate love stories in the movie, but this one works only because of him.