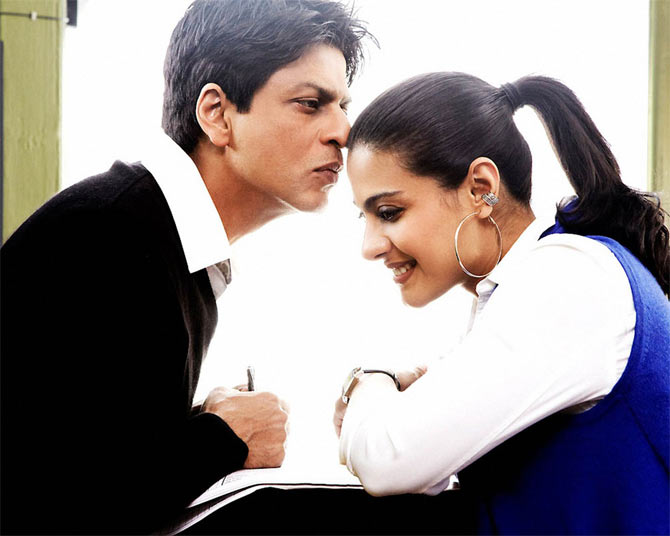 MNIK is a movie with a message. A simple one which goes along with the personality of the main protagonist who doesn’t understand emotional complexities. There are three ways of looking at religion. From the eyes of a man who understands and believes in god and the rituals. The second one from the eyes of a man who doesn’t understand rituals but believes in god. The third from a man who doesn’t understand either but pretends otherwise. This world largely forms of the second and the third man. This makes the life e of the first man quite difficult because however secular we (second category) may pretend to be, it scares the shit out of is if someone flaunts their religion openly. And Islam faces a lot of discrimination on this front and this is something that is visible through the movie.

In a scene in the movie, in a memorial service for the dead fire-fighters of 9/11 when people stop singing and Rizwan (SRK) offers prayers in Arabic, he might as well have been shouting abuses. You see the discomfort on the face of his wife who was alright till he prayed in the confines of her home but ‘public display of Affection’ for god is a strict no no.

Coming back to the movie, i would say that it has its intentions in place. There is a good story, the actors do well in their respective roles, the music is soothing and the dialogues especially the ones given to Khan are edgy and well delivered. But the only problem is the direction, and to an extent the editing.

Kajol had mentioned in an interview that Karan Johar gives his actors a lot of space to improvise upon the vision and the scenes while shooting. I don’t know if that is the reason that the movie looks fine scene by scene but not so much on the whole. Johar should have assigned the movie to someone else to really do justice to the script. He tries and i will give him a few brownie points for that but i just think it’s not his thing to take on a serious issue and mix it with a human emotion to tell a story. He is good at the second part but fails miserably at the first one.

·         What was the exact need for him to show the presidential election and the change of ruling parties as well as the presidents? It looked like he was paid off to make Obama look more humanitarian and social to the people of India who were the ultimate audience for the movie. The story could have as easily finished off when Bush was in power and that would have actually made more sense since 9/11 happened during his presidency.

·         Why was the attack on Rizwan in the end, added in the story? It didn’t really do anything to increase the sympathy factor for him. At least in the minds of the audience.

·         The Georgia bit was very poorly executed. The cliche names (Big mama, Big hair Joel), the hymn singing, the ‘hum honge kamyab’ (i was going to die due to sugar overdose) and in the end when people from across the country just showed up at the hurricane hit area (like it was next door).

My problem with the movie is that you don’t really feel anything. You are not grabbed by your balls and made to feel by the moving images on the big screen. The only thing that keeps the movie going is the acting by the lead pair. Even though the chemistry is not as crackling as it was or could have been, but they still hold the screen as noone else can. SRK is innocent like a child who would do anything to make his wife let him back in her life. Kajol is at her best. Watch her in the scene where she is holding the body of her dead son and you’ll remember why she is still one of the best in the industry even if we have hoards of bombshells now, with nothing more to flaunt but long legs. There is a dialogue in the movie where Khan tells a fellow muslim that “Namaz jagah se nahi neeyat se padhi jati hain”. MNIK has its neeyat in place even if it lack in other aspects. But watch it to see the world through the eyes of the man in the first category who is punished for the crimes he has not done.