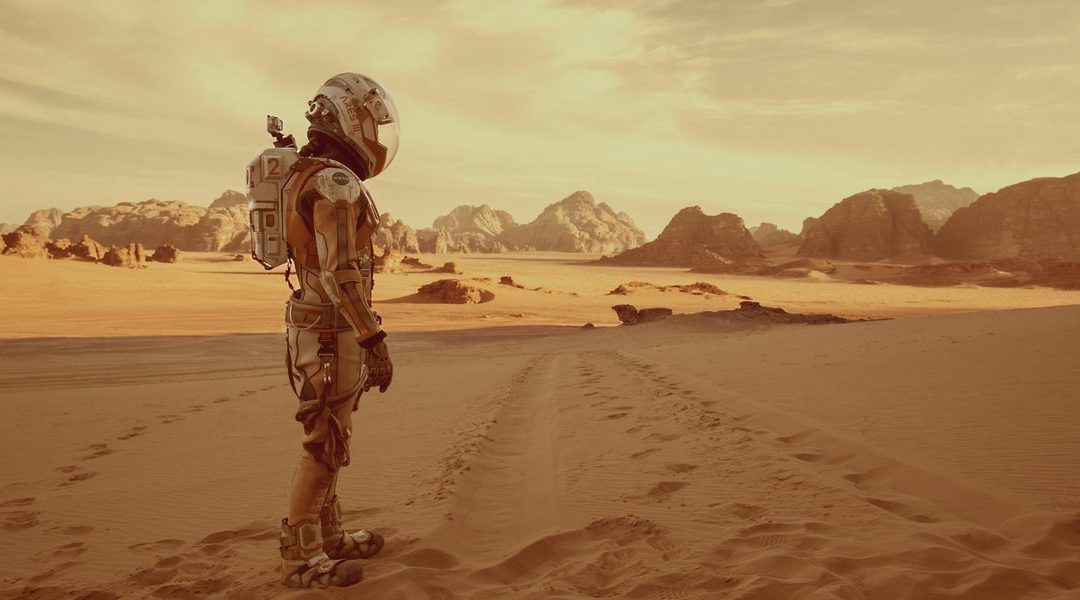 Let’s get one thing completely out of the way. The entertainment quotient of this film is so up there that you wouldn’t even come out with this big a smile even after watching a freaking Pixar film. This film will pump you with more endorphins than chocolate, sex and exercise. ‘The Martian’ is that rare film which has the good kind of bad. It is all Ridley Scott territory, with space travel, rocket launchers, alien foreign planet and all but it is also a pleasantly uplifting and upbeat film, which you might not expect from him. It is a surprise but a really good one.
Of course, much of the credit goes to its impressive lead, Matt Damon, who gives a brilliant wise-crack, rockstar astronaut performance that will fill up your heart and make you fall in love with him all over again. He slips into the role of astronaut Mark Watney who is presumed dead and thus left behind at Mars by his crew. Damon is insanely charming, talking to himself in video logs and yet in moments pained and exhausted like a person deserted on a planet to die. The scene where he patches himself up, has been seen numerous times on screen. But what sets this apart is the combination of pain, fear and survival instinct that is visible on Watney’s face as he does so. Yes, it is cool that he doing self-surgery but Scott is not smug about our protagonists heroism. And this is one bit that makes this movie such a delight to watch.
Scott’s material could have easily translated this film into an ‘Independence Day’, save the world kind of mediocrity that thrives on vanity but here none of this is true. Yes, you will cheer for Watney to reach back the Earth as does every other person on screen, there is even a global live telecast of the rescue mission but at no point would it feel pointless and over the top. Scott has managed with this film to make the kind of large strikingly beautiful, yet wonderfully personal film that made me fall in love with cinema for the first time.
The film could just have been about Mark Watney in the endless red sands of Mars, introspecting and surviving. Or a film about NASA trying to put a mission together to save Watney from this big red planet. And yet what we finally have this wonderfully nuanced journey of the humans on these two planets and the ones, mid space to do what they feel is right.
In plain words, The Martian is a joy to watch. It is that perfect combination of grand cinematic sets, an amazing collection of actors, a moving story of self-reliance, optimism and survival and a director that puts it together like a boss. And Disco!
Share karo yaar... tumhe filmon ki kasam