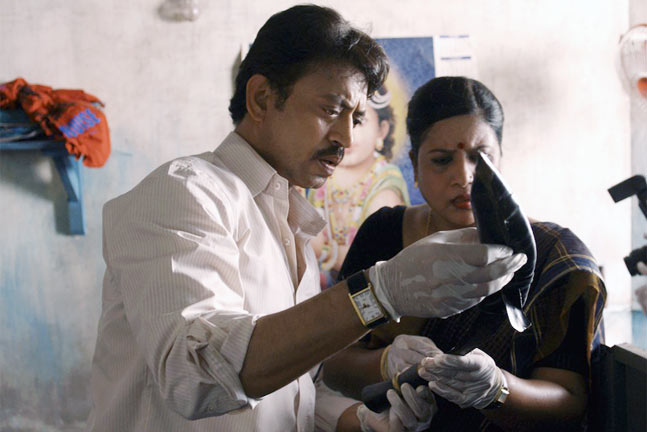 Two years back, I had wondered how would one make a film about this infamous double murder case. Without there ever being a conclusion, how ethical and unbiased could that final product be. After watching Talvar, written by Vishal Bhardwaj and directed by Meghna Gulzar, i have my answer. You tell a story like this, as a good but neutral storyteller.
The film’s strength lies in each and every aspect of the whole product. But the trump card is the brilliantly packed script which tries to give almost every version of a murder to the audience, the same suspects through the perspective of different investigators and finally the eventual red-tape and corruption that is our legal system. It is an amazing commentary on the society, media, police, courts and the legal process to which we assign our life.
It is not a long film but almost every time that you feel that the mystery is solved, you are told to keep sitting on your plush theatre seat, a bit longer. In a way it is exhausting and in another, it is a testament to the system that attempted to do justice in this story. The film, in a very subtle manner comments on everything that went wrong in this case but never points fingers or makes judgements. The questions are asked not by the writer or the director, but by the characters, to themselves and others. They make the case for us and we the audience are asked to believe whatever is it that we choose to feel is more truthful. It is a brilliant take and yet, on a topic like this i feel there could have been no other way to tell the story. The film’s finale is a pure joy to watch. I have not seen so much intelligence, stupidity, bias, judgement, desperation, humour and injustice packed in just one single scene in the longest time. Brilliant.
Talvar has the great privilege of having an exceptional cast. From Irrfan as the lead investigator Ashwin Kumar, Konkona Sen and Neeraj Kabi as the Tandons to every character actor, especially Sumir Gulati as the main suspect Kanhaiya. Of course, there are few scene stealing moments by Tabu as well, which add humour and romance to this otherwise thriller. Why aren’t more films being made with Irrfan and Tabu as leads is beyond me.
What finally makes this film a really great watch is that it is interesting. It is a story told and retold thousands of times by media. Possibly anyone who switched on their TV during that year would have heard every possible detail, real or fiction. But in the face of all that, the film is entertaining and engaging at every moment. If you are in, you would not be able to look away from the screen for even a minute less you miss a clue.
Watch Talvar, for not just its topic but for everything it does with that topic and i must say beautifully so.
Share karo yaar... tumhe filmon ki kasam