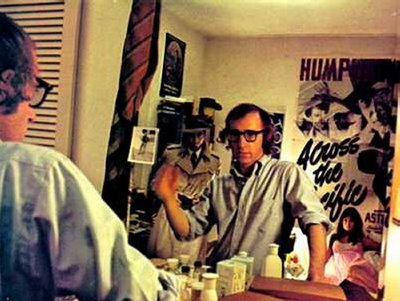 Play it again, Sam is special because it is one of those few movies which even though written by him, is not directed by him. Directed by Herbert Ross, in this flick you are able to see Allen in something other than just the physiologically screwed up character which you see everywhere else. Sure, you have Asprin, analysts and hallucination and screwed relationships which are regular Woody Allen fare but still, there is this vulnerability in the character which you don’t get to experience otherwise.

Play it again, Sam is one of the few movies which manages the feat to paying a tribute and making a great movie together, without any element overtaking the essence of the piece. The movie talks about attraction, anxiety, insecurity and everything that love brings along with itself. Woody Allen plays Allan Felix, a writer for a movie magazine, who is dumped by his wife of four years out of boredom. “She wants to ride a motorcycle, she wants to laugh,” says Allan out of frustration. “The cause of failure of the marriage was inadequate laughter,” he says. And you kind of get the tone of movie from there on. There is also a ghost of Humphrey Bogart (played by Jerry Lacy) that who keeps giving Allan advice on his love life, and constantly reminding him of the numerous ways he fails as a man in comparison to Bogart. The fact that Allan’s body can not take even a small dosage of any kind of alcohol does not help. But in spite of all his insecurities, the first time he is set up on a casual date by his friends Linda (Diane Keaton) and Dick (Tony Roberts), Allan’s face lights up like that of a little child being offered an ice cream. ‘I am going to bathe my body in canoe (a aftershave)’ he says excitedly. Allen is joined by only four other characters in this romantic comedy

There is Linda, as the best friend’s wife, who is sympathetic towards Allan’s cause and insecure about her own relationship. Her husband leaves no stone unturned to make her feel so, considering he is forever stuck on the phone, giving away landline numbers of each and every place he visits to his office people, less he misses out on some important information. This provides some of the most biting comic moments in the movie.

You would love the movie because of its simplicity. The awkwardness of Allan in front of women, the facade of intellectual garbage which he tries to put on to reach somewhere closer to his ideal Bogart, and how he fails every single time. On the other hand, his relationship with Linda grows by leaps and bound because he faces no pressure to impress there. It gives you a bird’s eye view of people in and out and in middle of a relationship and how their minds work. The slick dialogues and extremely funny situation and the nervousness of Allan help out the cause too. It is the best movie that Woody Allen has been a part of. It is not as beautiful as Manhattan or as sharp as Annie Hall, but this one is a comic piece of art.