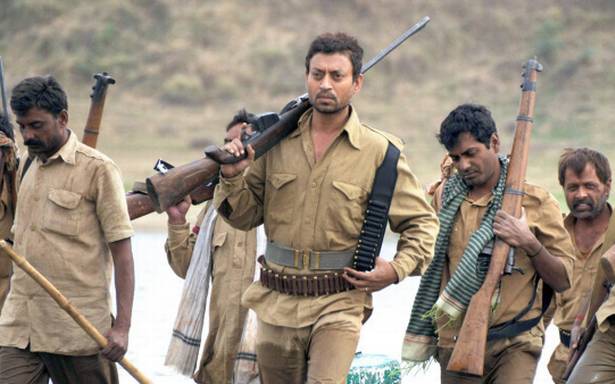 The first thing I would like to say about the movie ‘Paan Singh Tomar’ is that it is very entertaining. A true story of an athlete who turns into an outlaw may sound like serious fare but the combination of Tigmanshu Dhulia’s strong storytelling, Rajendra Gupta’s effervescent dialogues and Irrfan’s magnificent talent makes it a treat to watch.

The movie is very cleanly divided into Tomar’s life before and after he turned his back to the law of the land. And both parts are equally charming, deriving their humour from both Tomar’s lively attitude as well as the host of other characters he comes in contact with. Most part of the movie is shown as flashbacks where Tomar speaks about his life to a local reporter. The movie starts from 1950 when Paan Singh works in the Army while his wife and mother live in a village Morena. He surprises his seniors in the Army with his athletic skills because of which he is persuaded into going into 3000 meter steepchase, subsequently becoming a national champion. Through his time in the army you see Tomar growing from a young boy to a middle aged man, who is proud of his achievements and believe in the sanctity of life. He is someone you could relate to and would love to have known. As a bhaagi, Tomar is not too different. He is just bitter. Some of the most powerful scenes of the movie are the ones which show his anger and heartbreak at the publicity he receives after turning into an outlaw, though he was ignored as an International level athlete.

Mahie Gill plays Tomar’s wife and though she only has a few scenes in the movie, her screen presence is undisputable. Gill and Irrfan make a power couple when it comes to acting and together they sizzle like fireworks. The chemistry have share is a combination powerful word play and expressions making it a treat to watch. The beautiful part of this film is that almost all actors challenge and support the performance of Irrfan equally. There are no average performance. Everyone does their bit to build the life of Tomar in a manner most believable. One of the actors who shines is Vipin Sharma as Major Masand, Tomar’s senior in Army.  Jahangir Khan plays Bhawar Singh, the primary reason Tomar’s life changes and the animosity just burns through the screen. Other actors who leave a solid impression are Vipin Sharma, Brijendra Kala, Imran Hasnee and Rajendra Gupta.

I am not going to dedicate a paragraph of how well Dhulia has done as a director with this movie. It is comes across very easily when you sit to watch the film. Another person who needs a special mention is Rajendra Gupta for the dialogues. It is one of those movies where the dialogues are strong and support the story and take it forward with integrity and humour. Cinematography by Aseem Mishra, makes the running track look as magnificent as the hills of Chambal valley.

The film has been edited sharply by Aarti Bajaj though I have my reservations about the end. When it comes to biographies the all important question is where to end? The same is true for this movie.  It could have been ended at various point when the character of Tomar was at his strongest. Instead the director chooses to include the lengthy death of Tomar, a scene which does nothing for the movie. That is the only flaw of the movie in my eyes. Other than this, Dhulia is in complete control of the story and the characters.

There are good actors and then there are actors who raise the bar so high they it is impossible to imagine anyone else in the role. Irrfan is one such actor and as Paan Singh Tomar, you see him at his best, in a role that very few could pull off. The movie is a must watch for the fabulous work that Irrfan and Dhulia have done.