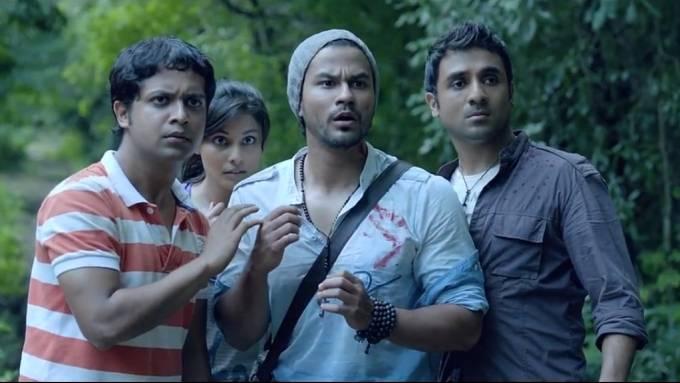 THE PLOT: Hardik (Kunal Khemu) and Luv (Vir Das), two dope heads tag along to Goa with their buddy, Bunny (Anand Tiwari), on his business trip. Luv comes across a free-spirited girl, Luna (Puja Gupta) who casually invites them to an exclusive underground rave party on a remote island! The party is headed by the macho Indo-Russian Mafioso, Boris (Saif Ali Khan). But all of a sudden, they are accosted by zombies!
HOW WAS IT?
Okay, first things first. Saif Ali Khan as the Indo-Russian Boris is there for only a part of the film, specifically the second part. And that is one of the primary reasons this film works so well. Devoid of over the top star power in the first half, the directors allow the three men Hardik, Luv and Bunny to bond as naturally as possible, letting the audience into their world of alcohol and marijuana.
Zombie comedies films like Zombieland, Shaun of the Dead (my favourite) have been part of cinema for a while now. With Go Goa Gone, Raj Nidimoru & Krishna D.K. try to bring this genre to the Indian audiences. I would not compare their attempt to any of the previous films considering that these films work as much on the style as they do on their story. That said, I was of course was disappointed to see one hilarious scene lifted mercilessly from ‘Shaun of the Dead’.
In ‘Go Goa Gone’ the premise is set wonderfully by the directors but it is after that the film suffers its big blow. Khan’s Boris is the weakest link in this comedy. Why was he made into this mishmash Dilli-Russian gangster is completely beyond me. And I have a strong feeling that he forgot what he was while shooting for the film because he speaks accent free English, Broken Russian English and flawless Hindi sometimes in the same sentence. Obviously, method acting is not his forte.
The high point of this film is the crackling chemistry of Hardik & Luv. The boy talk is kept as realistic as possible and the fact that they are always accompanied by a joint only makes the talk more hilarious. Kunal Khemu is out of the world as the dope head manwhore and I am hoping to see more of him in better films.
The film is made as much by the cast and the hilarious one-liners as by the music by the duo of Sachin-Jigar. Foot thumping and crazy fun, the soundtrack takes this zom-com to a whole new level. Surprisingly and thankfully there is only one small song and the length of the film is just about 2 hours, so even with the minimalistic plot twists, the film does not bore for long. Watch it this weekend!
Share karo yaar... tumhe filmon ki kasam