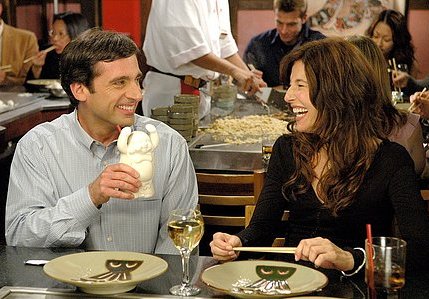 While he was already doing office before this was the movie that skyrocketed Steve Carell’s career into stardom from oblivion. And I think created a different genre of comedy altogether that forms a fine line between a senseless guy movie and a sloppy rom com. And it has been successfully followed by a series of other good watches like I love you, man, Forgetting Sarah Marshall, Knocked up among others (a world full of Paul Rudd and Seth Rogan).

The movie talks about a 40 year old guy Andy, who hasn’t got laid yet. He is not bad looking or even for that matter bad to talk to. It’s just that after the first few disastrous times he just completely gives up on the idea of ever experiencing sex. He happily shuts out that world from his mind, instead focusing on collecting comic memorabilia, playing video games and music instruments. He has a perfectly charted out life but no real people to share it with. He is too afraid to talk to men to much because his inexperience in the sexual department may show and would lead to embarrassment and generally keeps away from women. His perfectly put together life is shaken up when his little secret gets out to a bunch of office colleagues who make it their mission in life to get him laid. Everyone tries in their own different ways and Andy cooperates, willing to learn. From waxing his chest, to talking weird to girls to banging strangers before asking a girl you like out. Everything. In between he meets Trish (Catherine Keener), and starts dating her seriously. She on the other hand has her own set of problems with a sex crazed teenage daughter among others. While they fall in love with each other, they hold off the sex for some time which Andy is all too happy to do because he is scared. But his insecurity starts affecting him too much blows apart the relationship.
I started watching the movie expecting a mindless comedy, but it surprised me on various levels. While the movie is quite funny given its premise and the fact that you have three crazy mind dudes telling a virgin ways to have sex, it’s still sensitive. The lead character is not shown as a loser because of his problem. He is not a pity case either. And his journey to have sex is not spent in strip clubs and whore houses. It’s a real problem that is addressed maturely where this guy comes in terms with his own mental block and realizes that truth is the way to save any relationship. All the while the scenes in the movie are damn funny. I don’t know what is it about a guy getting waxed that blows me over but I died laughing watching that one. Steve Carell is perfect as Andy. He is not extremely charming and not a complete dork either. He turns the guy from just being a virgin to a human being. Paul Rudd is hilarious as a guy who can’t get his ex-girlfriend out of his system. The scenes where he talks about her lovingly and still calls her a whore for cheating on him is freaking awesome. Seth Rogan doesn’t have too much length in the movie but is funny in the ones he has. Catherine Keener plays the Andy’s love interest and is good. A special mention to Elizabeth Banks who is completely loveable as the crazy girl who finds Andy extremely attractive. She is a treat to watch in the two scenes she has. But the real stars of the movie are the writers Carell and Judd Apatow who make this movie as funny as it is without stooping to cheap jokes.
The movie is hilarious…a little too long at 2 hour plus but nonetheless extremely entertaining. Watch it.
Share karo yaar... tumhe filmon ki kasam