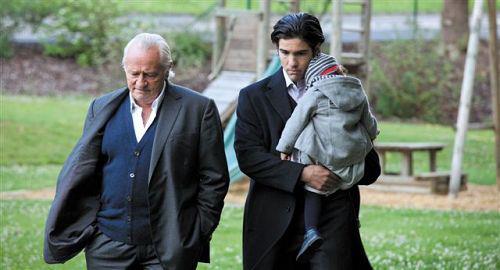 Often in mainstream cinema there are instances of grave horror that are mentioned but never explained. Joachim Lafosse’s film Our Children (French: À perdre la raison) is inspired by one such case of Genevieve Lhermitte, who turned herself to the police after coldly and clinically murdering her five kids with a kitchen knife. Co-written with Thomas Bidegain and Matthieu Reynaert, the script does the difficult work of leading the audience to the end of the road for a woman who does the unspeakable. And it does so with the coolness of an outsider, an invisible entity allowing us a glimpse into the perfect seeming world of Murielle (Emilie Dequenne) and letting the cracks appear slowly.

There are many films made on real life instances, but ‘Our Children’ diverts away from the very obvious crime and instead looks at the whole episode as it is stretches over a number of years. In the film, a Belgian schoolteacher, Murielle (Dequenne), and Moroccan immigrant, Mounir (Tahar Rahim), fall in love and decide to marry. Mounir’s surrogate father, Doctor Pinget (Niels Arestrup) offers them to stay at his place and also an assistant’s job to Mounir. After the marriage Murielle learns that Pinget had not only adopted Mounir but also married Mounir’s sister for visa purposes.

While Pinget’s actions can be termed as humanitarian, but here the extent of charity also leads to the burden of guilt. And with four children and an indebted husband, this guilt proves to be crippling for Murielle. The omnipresent Pinget and his control over the house, the finances, Mounir and thus also Murielle’s life is what creates an undeniable tension on screen.

Both Niels Arestrup and Tahar Rahim play their parts well too, creating a confined environment in the house and its inhabitants. While Arestrup has an aura of obtrusive masculinity, also reflecting from his actions, Rahim’s Mounir is the textbook case whose can only control Murielle to compensate for his lack of power everywhere else.

But the one performance that holds this film together is that of Emilie Dequenne. She portrays Murielle with a slow steady precision, with every scene building suffocation not just on her face but also in the mind of the viewer. From a free-spirited schoolteacher, to a tired mother of four and finally a murdered, we see Dequenne depicting Murielle with acute realism. The fatigue of school and housework shows on her face, the depression build up with every child-birth and the lack of intimacy and freedom, in the most gentle of manners goes on to push her one step closer to the end. The moments that we really feel her pain are the ones Murielle spends with Mounir’s Arabic speaking mother, because it is in those scenes that we see her depression fading away. In that time the difference between real affection and charity becomes crystal clear.

Joachim Lafosse’s film, despite its strong content is not testing on the eyes. Mostly limited to the happenings of everyday life, it instead creates a drama, where instances build up in our mind slowly, like the lull before a storm. And when the storm does come, it happens like an inevitability which you cannot quite believe and yet know was going to happen at the back of your mind.