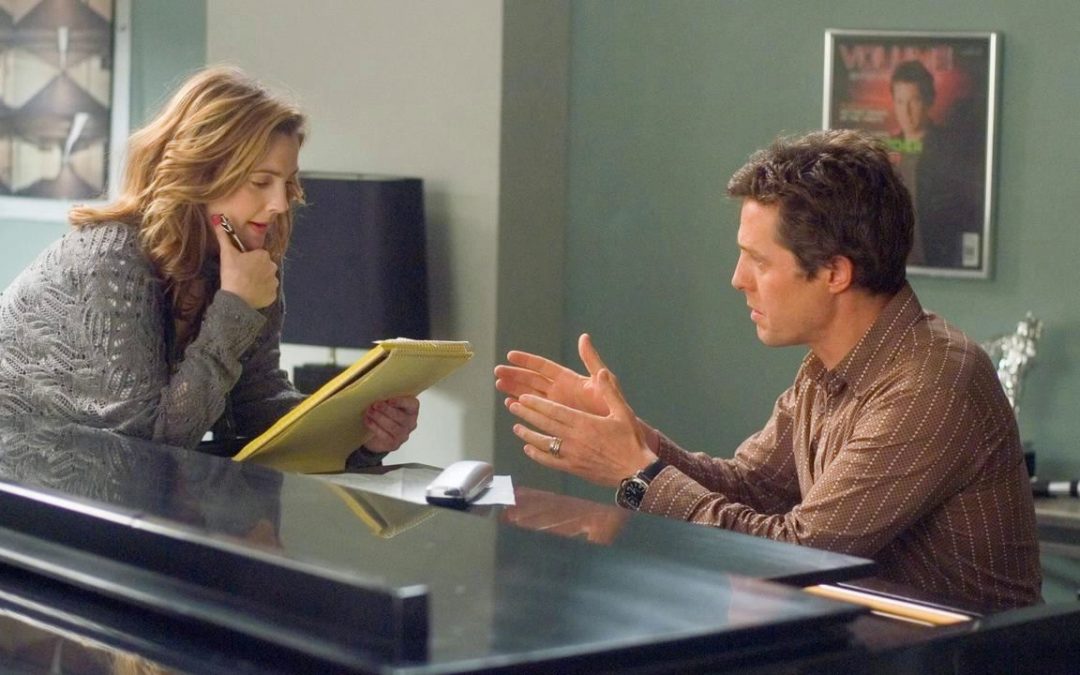 It is not a work of art. It never won any awards but it still is one of the movies that I always find myself watching whenever it airs on television. This 2007 romantic comedy is what I call, ‘easy on the ears’ rom-coms that don’t achieve the greatness that probably some might achieve but still are worth a repeat watch on a lazy Saturday afternoon.

Music and Lyrics, is a movie about a washed out pop artist Alex Fletcher (Hugh Grant) who was famous during the 80s in the band PoP! But after they disbanded Alex’s own career nosedived. Alex gets another chance of a comeback when teen star Cora Corman (Haley Bennett) commissions him to write a song called ‘Way Back Into Love’ for her new CD. He collaborates with a stranger Sophie Fisher (Drew Barrymore) who has a gift for writing lyrics.

In the romantic comedy genre, there is a certain type which I call the ‘Hugh Grant’ rom-coms, which the actor has mastered in his career. He often plays a charming but lost character whose life changes when he encounters the female lead. The females could be anyone, from a famous film actress (Julia Roberts in Notting Hill), an uptight lawyer (Sandra Bullock in Two Weeks Notice), an attractive American (Andie McDowell in Four Weddings and a Funeral) etc etc. To say that Music and Lyrics is any different would be wrong. Grant is charming and funny as Fletcher. And his life does take a turn when he meets Sofie Fisher, a quirky and confused writer. But nonetheless it is still entertaining to watch. Most of the Grant comedies are like Cakes. Yes there is flour, egg and sugar in all of them but unless you really screw it up, you end up something you can count on when you are hungry.

Music and Lyrics works due to a lot of reasons. While it does not delve into the topics too much it does take a look into the music industry, pop stars and as such the music which we are fed day and night on the television and the radio. Haley Bennett who plays a teen idol Cora Corman in the movie is one the most delightful parts of the film. The ‘Buddha in a thong’ ideology which is what Fletcher calls it is not only hilarious to watch but also forms a core part of the storyline. Check out the video of ‘Buddha’s Delight’ (on unedited DVDs) and you wouldn’t be able to stop laughing when fletcher calls her ‘very spiritual’.

Barrymore provides ample support to Grant, playing a writer who lacks confidence. She is cute and frothy and both of them together form this delicious combination which is lovely to watch. Barrymore herself is also quite competent at comedy so the conversations are always light and never become too emotional even during emotional moments. Two other great additions to the team are Brad Garrett who plays Alex’s manager Chris and Kristen Johnston who plays Sophie’s sister Rhonda. Johnston is loud and energetic while Garrett is like a slow bear protecting Fletcher. Some of the delightful moments of the movie are the ones that Grant and Barrymore share with these characters.

Now that we are done with the rest let me mention the one part of the movie that I actually love. The song ‘Way back into love’. Yes, it is all fictional and the characters in the film did not actually write it but still the making of the song is one of the most integral parts of the movie. And it doesn’t hurt that the songs itself is quite good. Both Music and Lyrics. A nice watch…cuddle up in the bed with a cup of hot chocolate.