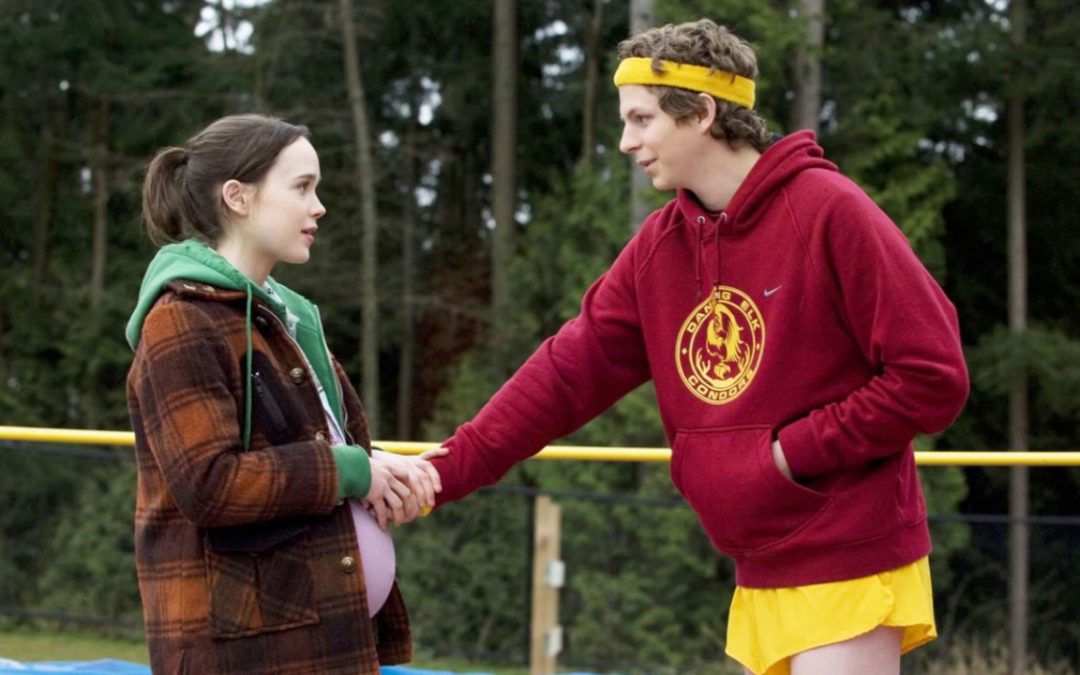 Juno, is the story of Juno (Ellen Page) as 16 year old who gets pregnant by her best friend Paulie Bleeker (Micheal Cera) and what transpires after that. The movie displays immense amount of maturity, as can be seen in every character in the story while being put in midst of a not so ordinary situation. You see no blame games, no sobs stories, and no melodrama. Period. Her parents do what parents are actually supposed to do. Support her in the decision even though they have their own insecurities to deal with. Her friends don’t ditch her and more importantly, Juno herself doesn’t ditch herself. That’s what forms the soul of the movie. Very rarely do I come across women protagonists in movies that show real strength of character. What’s great about Juno is the fact that it has that. She had the balls to accept her mistake and not kill herself for it. I guess that’s what strikes you the most about her. Her belief in herself as well as in the good in others. But all her confidence and intelligence aside, there are moments when you still see her fighting her repressed feelings for Bleeker, her best friend (father of her child – but not boyfriend) or her vulnerable side when she tries to hide her fear and confusion under brave and funny comments like ‘Hello, I’d like to procure a hasty abortion!’. Throughout the movie you see her growing as a person as does her belly.

Ellen Page is fantastic as Juno. This 20 year old terrifically portrays the confusions of a 16 year old who decides to have a child and give it away for abortion, deal with pregnancy, accept past mistakes and find love in the process. Allison Janney and J.K. Simmons are perfect as Juno’s parents. They are funny, caring and freaked out at the same time and make you wish for parents like that. Ellen Page shares an undeniable chemistry with both Michael Cera and Jason Bateman. But i did think that Jennifer Garner was wasted in the role of a ‘wannabe mother’. Her character could have been developed better to show the complexities that she may have been facing.

The real stars of the movie are writer Diablo Cody and Director Jason Reitman, who actually give the movie its casual and funny flavour while dealing with a serious issue like teenage pregnancy. Reitman, whose has previously directed the quirky ‘Thank you for smoking’, has a way of dealing with socially unacceptable topics and show them in a different light altogether, say what everyone thinks but never says and just put it out there on the screen as casually as possible. One of the most touching scenes of the movie was when Juno and Bleeker lie side by side on the bed after the delivery and just hold on to each other, with her crying. Juno’s emotions as a mother and a teenager are perfectly visible in that moment. The music, mostly mellow and acoustic blends in perfectly with the story giving it a indie-rock feel, with the leads being members of a band. The song “Anyone Else But You” sung by Michael Cera and Page at the end of the movie that is adorable and gives the movie a very sweet ending.

Considering the fact that the story revolved around an unplanned teenage pregnancy, it was very easy to get lost in the melodrama that generally accompanies anything and everything associated with the topic. But ‘Juno’, does not even remotely delve into any of the ‘Oh my god! My life is ruined, my boyfriend is to be blamed, what would the society say, how am I gonna live!’ nonsense that forms the heart and soul of many such art works. And that is what makes it such a pleasure to watch.