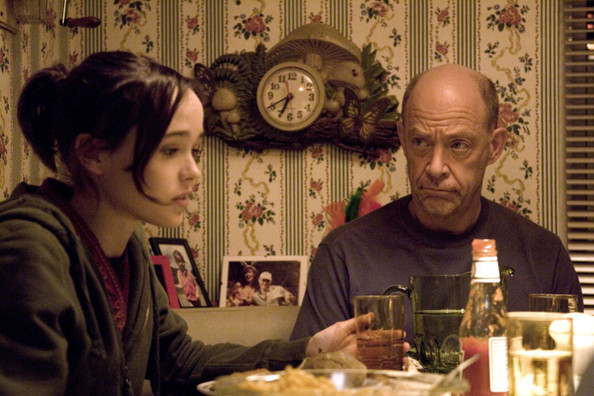 Long time back, I heard someone mention how stupid they found this recent movie ‘Juno’ to be. I never fought back for this beautiful film at that moment, and later decided that someone who could not appreciate a movie as entertaining and moving as this one, couldn’t have much going on in their brains. Recently I saw the film again and decided that it deserves another go from my end.

There are many versions of teenagers that we see in American films, but mostly they are limited to the stereotypes of popular and unpopular. In Juno, we have a something that drifts away from these two categories. She is shockingly confident, which might have make us confuse her for a geek but she steers away from that too with her caustic humour and the fact that her best friend is a cheerleader. Juno’s charm lies in the fact that unknown to her she does not know how to deal with everything. While she deals with the pregnancy with élan, it is her feelings for the baby’s father, Bleeker (Micheal Cera) that she cannot deal with. And finally it boils down to just that. Love. Because however confident you may be and how much ever you may score in some test, it is no guarantee that you are smart enough to deal with real Love even when it hits you between the eye.

Much has been written about this film’s depiction of teenage pregnancy. Ellen Page’s groundbreaking performance was one of the best in 2007, not to mention the independent voice of writer Diablo Cody and subtle direction by Jason Reitman. But what I love the most about this dramady (drama-comedy) is the last 20 minutes when we finally see all characters come out of their predetermined comfort zone and turn into something that surprise the audience.

In the beginning, we see Mark (Jason Bateman) and Vanessa (Jennifer Garner), the baby’s adoptive parents and decide instantaneously that we like Mark, the cool, guitar playing, comic book reading husband and dislike the control freak Vanessa. But the magic of the film lies in the fact that it is not about who is cool but about growing up. Later in the film as Juno walks out of their house, after finding out that Mark is leaving Vanessa, you see her broken up for the first time because probably it is the first time she is in a situation she is not prepared to deal with. These are the moments that make this film more than a teenage drama.

Juno is a movie of strange emotions. You will feel lumps in your throat as you see Juno confessing her love to Bleeker or when she cries in her hospital bed after the delivery. But the director never exploits those moments to make you cry. Instead, he drops in a small joke to make you hold that tear inside. That is what makes this film brilliant.