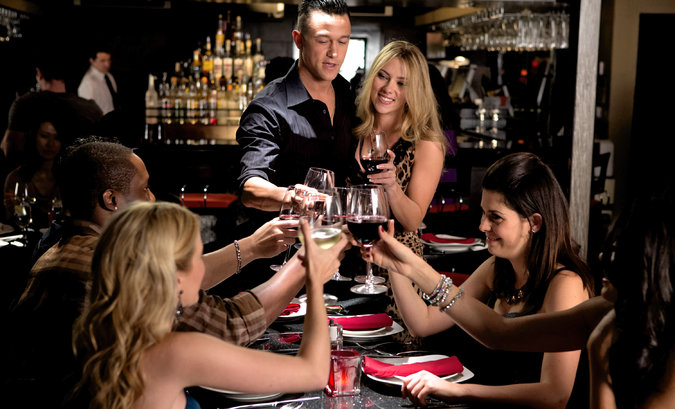 I once, many weeks ago had a casual conversation with a friend, the central idea being if we are actually the best judge of what we find sexually attractive. How much of our desire is actually generated from the idea of desirable propagated from other people, television, magazines, and films in contrast to what is actually organic? And how many of us actually turn down real happiness because it does not fit into this idea that we have?
‘Don Jon’ may not have all the answers but it does ask some pertinent questions.
The film revolves around Italian American man, Jon Martello (Joseph Gordon-Levitt) and follows him through his routine, his relationship with a woman Barbara and finally him coming face to face with his addiction to porn. But in reality the film not so much about pornography as about men and women, what they feel about each other and themselves.  Porn is just used as symbol for men’s idea of a woman and sexuality in general.
Jon has a short list of things he cares about which include his body, house, car, family, church, male friends, girls and porn. This list is very important because not only is it a compilation of things Jon takes seriously but also very subtly imply what he is supposed to care about by society. Jon is a good looking man, a fact that is reiterated through the film. This, along with the many other masculine aspects of his life including the religious weight training routine is important because it is stressed on from very early that he is a desirable guy. He can and does get a lot of women, despite the encounters being robotic and repetitive. But only in a very private conversation with the audience does he accept that these sexual encounters are not mind-blowing and hardly compare to watching pornography where he can control what he needs mentally. But this information hardly matters or affects him because to the outside world only what matters is the act of sex and the attractiveness of the woman it’s done with, both criterias he scores in and thus should be perfectly satisfied.
Barbara Sugarman (Scarlett Johansson) enters this equation as a beautiful woman, her beauty being one of the most defining characters about her personality, something that she is very aware of. The relationship dynamics of Barbara and Jon, though laced with innumerable stereotypes, however correct, is an interesting study. She plays hard to get, keeping sex as a prized possession till she knows she can keep Don, as she wants him to be. In one of the most interesting scenes of the film Barbara declares Don’s excellent housekeeping skills despicable because it does not go along with the idea of sexy. Just like Jon, she is too trapped in a stereotype of masculinity which she thinks she is attracted to.
The film also stars Julianne Moore in a role I would rather not talk about because it is integral to the story. A surprise package in the film is Johansson whose role as Barbara is something quite unlike what she usually plays. It is not a role that will get her an Oscar nomination but definitely made me see her in a very different light. Gordon-Levitt, scores as an actor and director but I would give him the most points for writing this film, using the romantic-comedy genre to give the audience something completely unexpected, fresh and thought provoking.
Share karo yaar... tumhe filmon ki kasam