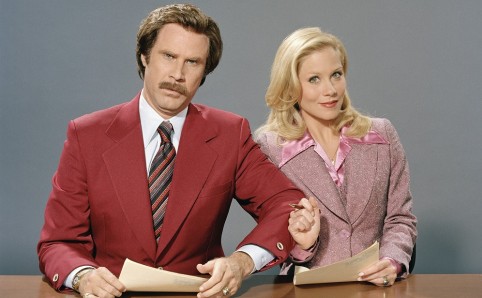 So….I was just super physced on getting to see just Will Farrell, Steve Carell and Paul Rudd, but this is a movie that just keeps giving. This the KJo movie of Hollywood comedies with an additional cast of Christina Applegate, Seth Rogen, Vince Vaughn, Will Farrell, Luke Wilson, Ben Stiller, Tim Robins, Jack Black and all on the same screen. While most of them were only there in small appearances but it was a super delight to see all the funny men I love in one movie together. Did I mention it had Seth Rogen? (Of course, in the old days when he wasn’t a star but who cares?)

Anchorman is an in your face slapstick comedy. From the goofball main leads who are supposed to be newsmen, the newsroom looks no more than a circus ground. Will Farell plays Ron Burgundy, the anchorman of the leading news channel, along with the group of three retarded co-anchors, Brian Fantana (Paul Rudd), Brick Tamland (Steve Carell) and Champ Kind (David Koechner). These three put together are no less than a monkey parade and sometimes even look like that. There world is shook badly when a female journalist Veronica Corningstone (Christina Applegate) is roped in to give a little diversity to the channel. And while each of the four tries their hand at seducing her, it’s Ron that finally manages to do the impossible. Only that he never really takes her dreams of being an Anchorwoman seriously. In his dreams, she would quit the day they are married to have two kids and make ‘whoopie’ after he comes back from work. His dreams are obviously shattered when Veronica accidentally gets to anchor a show when Ron is stuck somewhere, brawling with a stranger (Jack Black). The result is not too good and its best you see the movie to enjoy the horrendous acts of revenge.

The movie has a brilliant cast. Some of the best known names in the genre of comedy and it does nothing but makes the movie more attractive. I must name Steve Carell especially because of his retarded grown up man act. Brilliantly funny! Paul Rudd with his masculine act is hilarious. Will Farell and Christina Applegate do justice to their lead roles. Enjoy the rollercoaster ride on a chilled out Sunday afternoon, or if you are anything like me, on a Monday morning before leaving for office. It will help in keeping a smile on your face through at least half the day.