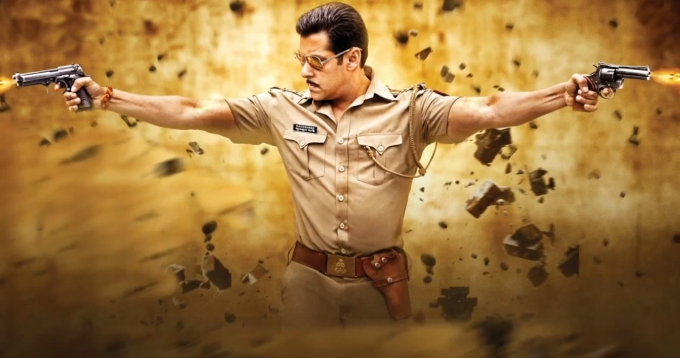 I went into the cinema hall expecting nothing more than to be entertained. And to give the Khan Brothers credit, I was entertained for the length of the entire film. While I loved ‘Dabangg’ it is with its sequel that I have finally understood the concept of masala films, which are made with the intention of doing nothing more than to entertain the audience. Let’s be clear, ‘Dabangg 2’ is very similar to its predecessor, never really trying to be something different but nonetheless it does that with no pretences. And probably that is why despite the eerie similarity it still works.
In Dabangg 2, which starts off only a month or so after Dabangg, we see the Pandey clan settle in Kanpur.  The villain this time around is a goon/politician called Bacchaji (Prakash Raj) who has two inanely named brothers Genda (Deepak Dobriyal) and Chunni. Chulbul Pandey (Salman Khan) with his fast paced tongue and Kung-fu Pandey action, obviously becomes a problem for him, leading to the final fight sequence. The story is of course of no consequence, because this film, much like Hangover-2 follows the pattern set by the previous film which was directed by Abhinav Kashyap. Writer Dilip Shukla keeps the motivations of the characters intact with the only difference being the peaceful domestic life of Chulbul, issues with  his step-father Prajapati Pandey (Vinod Khanna) and brother Makkhi (Arbaaz Khan) now sorted. The established romance with wife Rajjo (Sonakshi Sinha) is quite a disappointment and is restricted to two songs and a couple of dialogues only.
With this film, Chulbul Pandey’s character has evolved to something similar to a comic book protagonist, a combination of He-man and Deadpool who breaks into a song occasionally. But unlike Batman, Spiderman, Superman and every other man in this world who suffers from the issue of protecting their loved ones from the Bad men, Mr Pandey does not play by the same rules. Instead he believes in killing people wherever required with no thought of consequence or probably an over-active mind, smart enough to get out of any situation. His take on a dirty cop is one of the biggest triumphs of this film because it is he, who keeps my eyes firmly on the screen throughout. Salman Khan does get to do it all in almost all his films nowadays (Wanted, Bodyguard, Ek Tha Tiger) but here he takes on the task of lifting the entire film on his broad shoulders and excel in almost every department. Whether it is an occasional tear in the hospital, humourous pranks on his father, romancing his wife, beating up the criminals flawlessly and of course, dancing with the nauch girls, he does it all. And he does it with style. Khan who was once known as the ever so lost lover-boy Prem has definitely left those days behind him.
Stating the obvious, with a slightly more intelligent villain this film would have been amazing. But producer/director Arbaaz Khan’s motivations are different and thus we have a superb Prakash Raj’s Bacchaji coming across as nothing more than a goon who gets thrashed by the hero in the end. I can almost imagine the third film in the theaters in 2014 because it does not take too much imagination. The only thing I was really disappointed with was the minuscule role given to the brilliant Deepak Dobriyal. To waste the talent of such an actor is the biggest mistake that the director has made in this film. But, with so much screen time dedicated to Pandeyji, I would have been surprised to see any actor getting more than 10 minutes. He is the one, afterall, who is getting the audience into the theatres and bringing in the Crores.
In short, Dabangg 2 is entertaining. Watch with you family and friends, with a bucket of fresh popcorn.
Share karo yaar... tumhe filmon ki kasam