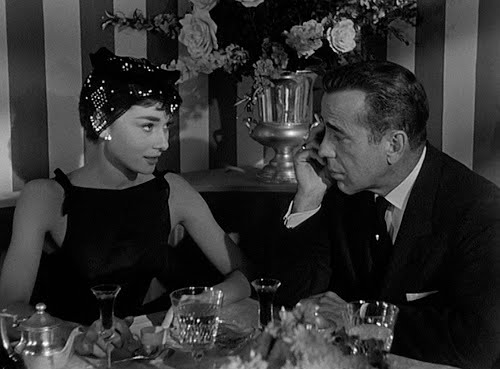 They say that the movies made in the past were classic. Nothing, not even technological advancements can take away the charm of the black and white stills of those movies. I don’t know about all that. Well Audrey Hepburn does look straight from heaven in each of the scenes in this one but the charm of Sabrina lies in the simplicity of the story and the great performances by both Hepburn and Bogart which bring the characters to life.
Sabrina’s story is very simple. Sabrina is the chauffer’s daughter in love with the younger son of the Larrabee family, David (Willam Holden) since she was nine. Davis on the other hand, well known for his affairs never really takes notice of her till she comes back from Paris, sporting a new attire and attitude. This new twist proves to be an inconvenience for his brother Linus’s (Bogart) business expansion plans with David’s fiancée’s family. So in a way to get rid of her Linus plans to make her fall in love with him and ship her off to Paris. But i guess its difficult to be around someone as beautiful as Sabrina is without falling in love with her.
The beauty of the movie completely lies in the lead characters. Sabrina is very straightforward and so in love with the idea of David that she is not able to deal with it when she actually starts falling for Linus. Linus on the other hand is not able to differentiate between love and the act he tries to put up ineffectively. Audrey Hepburn and Bogart create magic on screen. While Bogart is reserved and businesslike, Hepburn is full of life and oh so beautiful. She looks like an absolute dream. No wonder Linus falls in love with her in the end. Only Hepburn could have played this character and though there was a remake made later, the original remains the best.

Watch it to see what a good romantic comedy is all about.
Share karo yaar... tumhe filmon ki kasam