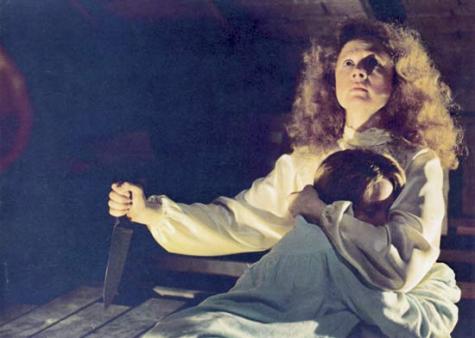 Carrie is not really horror movie, in the sense that there is no supernatural evil powers at work but human beings, I believe can be quite horrifying on their own. This Brian De Palma film based on the book ‘Carrie’ by Stephen King explores the dark side of human nature and how sometimes it can do more damage than even the anti-Christ.

The movie tells the story of a tormented high school teenager called Carrie (Sissy Spacek). Carrie lives with her overly religious, abusive and almost psychotic mother Margaret (Piper Laurie) and is additionally teased by people in her school. Chris Hargensen (Nancy Allen), one of the girls at school holds a grudge against her because she is forced into detention for teasing Carrie. Carrie’s life changes when she finds out that she has telekinetic powers about which she tells her mother who takes it as the work of Satan. But a changed Carrie takes matters in her own hand and decides to go to the prom and behave like a normal teenager against her mother’s wishes. But Chris has an evil plan to destroy her night which she executes, leading Carrie to go out of control with her powers.

The movie is a classic and one of the best Horror movies I have come across. The biggest strength of the movie is the sharp direction and the breath taking performances by Spacek and Laurie. You would not have seen a more evil mother (maybe with an exception of Monique’s performance in Precious). Sissy Spacek is shy, lost and so out of control in the last part of the movie that it will scare you to death. The haunting music (and an occasional four note violin theme from ‘Psycho’) adds to the scare factor and the movie doesn’t shy away from being in your face and very plain in it’s narration. Since Carrie’s character is of a young, good but tortured girl you don’t really expect her to harm anyone undeservingly but the movie is so powerful because it exposes the working of the sub-conscious mind and how unruly it is. And more than that you realise how even small cruel things done to someone can have a snowball effect in situations.

Carrie is a thrilling watch which will catch your eye from the first scene itself. Watch it for a great performance and the very creepy last scene which will make you jump in your seats.