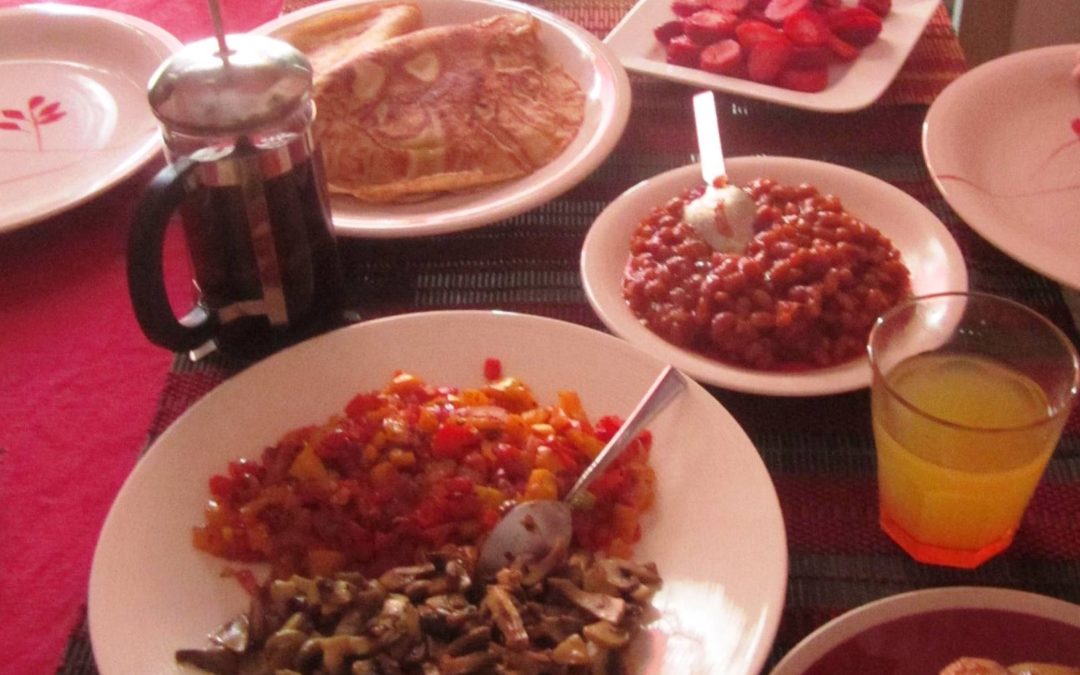 Called one of the most important meals of the day, sadly Breakfast is also the most ignored meals of the day. So much so that now advertisers have make believe wars between boiled eggs and mobile phones to sell the easy to eat cornflakes. I would be lying if I say that I don’t share the dilemma every morning but yet all said and done there is nothing better than a heavy fulfilling breakfast to brighten up my day. My favourites things to do on the weekend is a heavy breakfast brunch which lasts till the noon. There is nothing better than to gorge on fresh food in the morning and what is even better is the siesta that follows!
‘Traditionally an English breakfast includes bacon, poached or fried eggs, fried or grilled tomatoes, fried mushrooms, bread or toast with butter and sausages, baked beans, and hash browns, usually served with a mug of tea.’
The easiest part of the entire meal are the eggs and sausages, which all need to be just fried up a little. But personally I do experiment with the potatoes and vegetables to make it slightly more attractive to the vegetarian me. One of the things that I add often is a French dish called Potatoes Dauphinoise, which is dish of baked potatoes and onions with cream. Another addition is Pancakes! While it may all sound very difficult to put together, an English breakfast is easier than it sounds.
Put it together yourself –
Pancakes or Waffles – Pancakes are one the easiest things to whip in the kitchen. Made like Dosas, the only thing that differentiates them is the batter and the thickness. Waffles are made from the same batter but cooked in a waffle iron instead of a pan. You can add other ingredients like dried blueberries or strawberries to spice up the simple recipe.
Ingredients:
Method:
Baked Beans – It is best to get these in a tin can but sauté them with some chilli, onions and pepper to give them an extra zing before you serve.
Potato Dauphinoise –
Ingredients:
Method:
Hash brown – Hash browns is just another name for desi ‘Aloo Tikki’. Instead of boiled potatoes here where potato pieces are pan-fried after being shredded to make it crisp.
http://www.hungrysher.com/2011/10/love-potatoes.html
Share karo yaar... tumhe filmon ki kasam