Call me a sucker for romance, which although I am not, I will gladly take the insult because of my love for the movie. 15 years back, as a 9 year old when I first saw the movie on the bad quality cassette, that my father had bought from the local video parlour, I fell in love. It was the only movie which, even as a small child, I knew would be a great hit before its release. Because before the release, when i saw the making of the movie, I heard Shah Rukh Khan say, “Come, fall in love.”

That is what the movie is all about, for me. When I first saw the movie, I was totally bowled over by everything I saw on screen. It was the ultimate love story. And today, at 24, when I see the movie 15 years after it was made, it still makes me feel the same way it did for the first time, something that no other movie (romantic genre alone) has managed to do. I still think that no other couple has ever looked as fresh as Raj and Simran did. No one has ever looked so much in love and no one ever fought for their love so much. And no train chase has looked so heart wrenching. Ever.

Aakash’s (Aamir) shaadi proposal in Dil Chahata Hain, was nice and really moving but nothing beats Raj staring into Bauji’s (Amrish Puri) eyes at the railway station, bleeding and still filled with hope, when he boards the train. That is just pure awesome.

I spent two days of my life trying to come up with good romantic flicks that came after DDLJ but nothing came even remotely close to the magic that was created by that movie. As I said earlier, I feel that a romantic love story is successful only when people find falling in love fashionable. When being in love becomes the ‘thing to do’. Not dating. Not having a girlfriend or a boyfriend but actually being in love. People copy a lot of stuff from movie, mostly clothes, hairstyles and dialogues but you know you have made a classic when people actually fall in love. And that is where DDLJ stands out. It makes you want to fall in love.

One of my friends, who had spent some time in Chennai agreed to my point while I bored her with my love for the movie. “So many people over there (in Chennai) got married secretly and went back to college around the time ‘Alaipayuthey’ was released. And apparently suicides became the thing to do after ‘Ek Duje Ke Liye’,” she said. I would have preferred if people would learn something less dangerous though. And that is why DDLJ is different. Nobody ran away, nobody killed anyone and nobody committed suicide and my favourite, nobody started drinking out of depression.

The protagonists in the movie had the guts to do the right thing and actually fight for what they thought was right. Yes, Raj had behaved like an ass with Simran’s father but then the point is that nobody is perfect. He still makes the effort to stand up to his decision and act like an adult when it is required. And his father gives him the morale boost that I so wish parents could give their children, not just to get into the right college but for everything. One of the best lines from the movie is when Anupam Kher tells his son, “Meine tughe yeh tuntuna bajene ke liye paida nahi kiya tha.” Bang on! 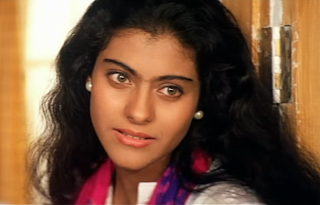 And you have to give it to them. Both of them were so bloody sly and though there was no long term plan, they knew how to get things done. In a scene from the movie, when Raj is chatting up Simran’s mom in the kitchen, telling her that he’s helping out with household work to get a beautiful bride, if you look closely you realize that he is bloody flirting with three women at the same time. The three women being, Mandira bedi’s character, Simran and Simran’s mom. You have to give it to him. He was damn charming in the movie. And while Simran did behave like an uptight HR executive who was always worried about soft elements in the project (wedding ring finger and karvachauth) she always managed to find a way around the situation herself instead of behaving like a damsel in distress. Everything was a two way process. The woman actually sings ‘Om Jai Jagdish’ to impress her father and then nicely strokes his ego saying that though it is my life, i am still asking your permission to go for the trip. That woman knew how to get work done and I think everyone could learn a bit or two from them.

Even today, the movie still strikes a chord because of the second half. The first half is something that a lot of people have tried replicating in a lot of movies and though it is impossible to replicate the chemistry between SRK and Kajol that lit up the screen, it is not difficult to make two people in love during a foreign trip. But it is the second half of the movie that transcends time as well as generations. People today, even after 15 years have problems with family approval. And for reasons that vary from ego, caste, religion, money to almost nothing at all. People still find it difficult to fight for their love, even more now, with the word ‘break-up’ used so casually. And this is why the movie will always be a classic. It talks about basic human relationships, which will always remain the same. Today’s Simran may find nothing wrong with spending a night with a guy in the same room, but if her dad/mom have a problem with a guy she will still have to go through the same shit (if running away is not an option).

All said and done, even today, when you see the song which made the mustard fields the most romantic spot on the earth, you can’t help but feel the love. You have to be emotionally dead to see the happiness on the faces of Raj and Simran when they see each other. And the fact that they hadn’t even said anything to each other till then and just run into each other….is just pure joy. My favourite scene from the movie is when Raj expresses his love for Simran by refusing to come to her wedding. That one line, “Main nahi aaunga.” Those three words expressed love, pain and anger at the same time. Beautiful.