After having found that my dear husband is not a fan of sour in dessert (read lemon tart, sour cream etc), I embarked on the journey to make a sweet cheesecake. A New York Cheesecake, no less. But before I did so, I thought it would be a good idea to understand what a cheesecake is.
Cheesecake is a cake made purely out of cream cheese on a crust made out of biscuit. Acquired from Greece, this desert has been given a variety of forms in almost all regions that make it. Some of the examples are a number of North American varieties including NY style, German styled, Bulgarian, Italian, Roman, French and many more. The differences lie in the kind of toppings, whether they are baked or chilled and the milk products (cheese) used.
As I read it, if you use cheese and it is set in the form of a cake, I will call it a cheesecake. I was especially irritated since I could not find one consistent recipe of a NY Cheesecake. Some use biscuits, others flour, some have sour cream others lemon and orange juice. So what I did was create my own recipe considering I found no consistency in what was out there.
Afterall, its sugar, cream cheese and eggs. How bad could it go? Not bad it turns out. 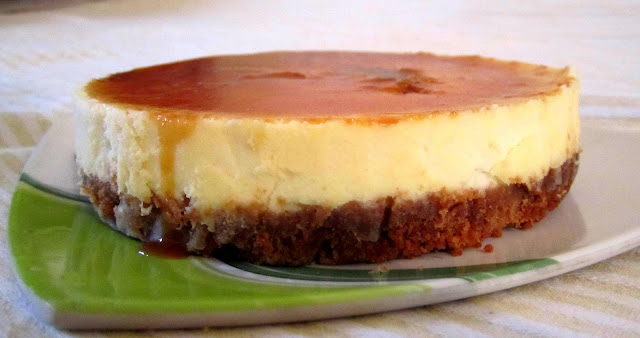 First the crust:
Though the filling recipe I liked had the base of flour I found it a complete waste of time. So I decided to go for the biscuit crust that most others go for.
Then the filling:
Now the basics remain the same in this one.
Topping:
I had not even thought of a topping but the sight of colourful pictures of fruit, jelly and what not did not make my little baby look that good. So I did the next best thing than getting blueberries. Make a caramel topping.
WARNING: Hot caramel is hotter than boiling water. So don’t put it in your mouth till it is cooled.
Share karo yaar... tumhe filmon ki kasam