Considering I have been making cakes for a while now, baking their tiny counterpart should not have been that exciting. But alas! Just the thought of placing my newly purchased muffin tray in the oven gave me goosebumps and I started on a Sunday morning baking spree. With neither vanilla, chocolate or fruits of any kind available in the house, it turned out to be a difficult task to produce something substantial. Cinnamon and butter muffins topped with a lemon and honey glaze is what I came up with. And top it up with some raisins and almond and the muffins are a great companion for the morning cup of coffee too.
Unfortunately my butter and egg mixture split during cooking. For those who don’t know what that means, I would say that its something you don’t want happening to your first attempt. So make sure you use a mixer to blend the butter and egg together and also use soft butter which has been out of the refrigerator for some time (don’t heat it). Now that I have warned you against all the unwanted calamities that might attack your muffin, lets get on with the fabulous recipe. 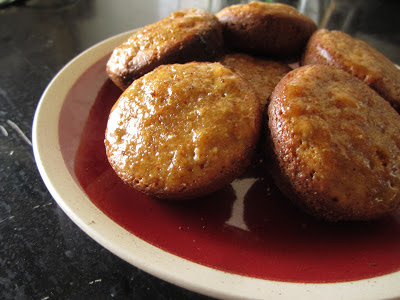