The thing about Italian food is that it sounds so fancy that sometimes even the easiest things seem to difficult to whip up in the kitchen. The reality is however far from it. An example would be the popular Italian antipasto (or appetizer as us lesser mortals call it). You look above and what do you see? “Bread with a bunch of stuff on it.” Yes. And Bruschetta is exactly that. It is roasted bread rubbed with garlic and topped with extra-virgin olive oil, salt and pepper.

“That’s easy,” I would say. So why stop there? Variations of this appetizer also include toppings. These may include spicy red pepper, tomato, vegetables, beans, meat, or cheese. Whip up a couple of veggies in the pan and you have a absolutely fantastic ‘Antipasto’ to serve. 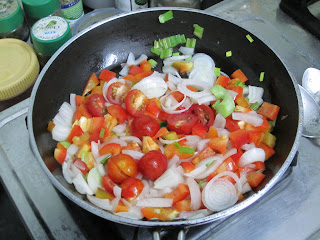 Ingredients:
Bread or French baguette
Olive Oil
Garlic cloves
Spring onions/Onions
Cherry tomatoes
Red pepper
Basil
Chilli flakes
Salt
Pepper
For the bread:
Preheat the over at 200 deg C
Rub the bread with some garlic infused olive oil
Place the bread on the baking plate and toast it for 10 minutes till it is golden brown
Veggies:
Fry up the veggies in a pan on medium heat in olive oil
Season with salt, pepper and chilli flakes
Place the dressing over the bread and garnish with fresh Basil.
Yenjoy!
Share karo yaar... tumhe filmon ki kasam