Everyone loves Croissants. You are inhuman if you don’t. And after I finally made them from scratch yesterday I found out exactly why they taste so freaking brilliant. Because of all the butter. And because of all the Work! I thought making tarts was work but after yesterday I could makes those with one hand. Okay that is reaching out too far, I need two hands but I not so much time and effort.
If I could make a comparison, I would do it with the Laccha Paratha that we all love so much. Or the Kerala Parotta, with layers of flaky wheat and ghee.  Only, in the case of both the before mentioned breads, the dough is not fermented with yeast and thus the preparation time decreases monumentally.
While the origins of this buttery flaky bread vary, it can be safely said to have been born in Europe and is one of my favourite breakfast foods. Unfortunately, I do not live nearby a quaint little bakery which would sell me these while I reach there in my bicycle (I don’t live in the US or Europe). So in a fit of desperation I decided to make them at home. How difficult could they be? I thought to myself. Was I wrong!
To those who haven’t yet understood how exactly the final multi layered product is created, the technique is quite simple. After the preparation of the main dough, it is rolled out and a thin but big slab of butter is placed on it. After this, the dough is folded (much like a napkin) and rolled many time, over and over again, to create the many layers of dough and butter in the final product. The problem here is that since butter melts at room temperature, after every fold and roll, the whole thing has to be refrigerated for an hour before you can make another fold. That’s at least 3 hours for making 3 rolls. Add to that at least 4 hours for the dough to rise twice before you can place the butter in it, and you know what a lengthy process making these delicious babies it.
Surprisingly, cutting and shaping the croissants turned out to be the easiest thing in the entire process. Just make triangles out of the dough, and roll from the widest end to the shortest. Voila!
The one thing that you should remember though is to let the dough rest on the kitchen counter for 5 minutes before you roll it otherwise the butter with break into chunks inside it. And also, use unsalted butter. I used salted Amul butter because of lack of resources, and though the final product turned out to be completely delicious, I could not imagine slathering them with more butter while eating them, which I otherwise always do.
If you an experimental sort who is up for a challenge then I would strongly suggest you trying this out. The result is deeply gratifying. 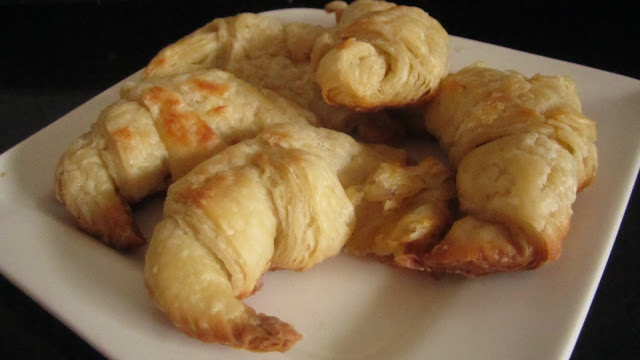 Let the dough rise again for 1 hour. Then place it in the refrigerator for 30 minutes.
Making the butter layers 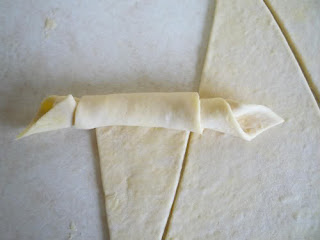 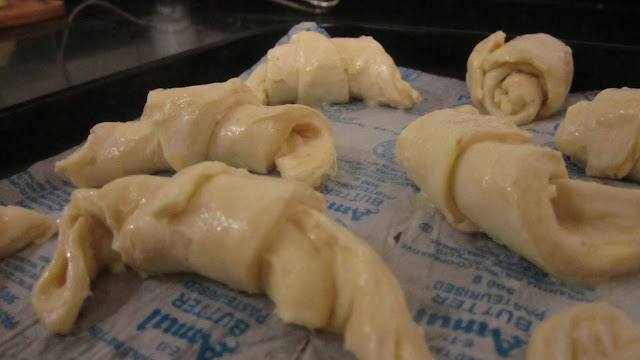