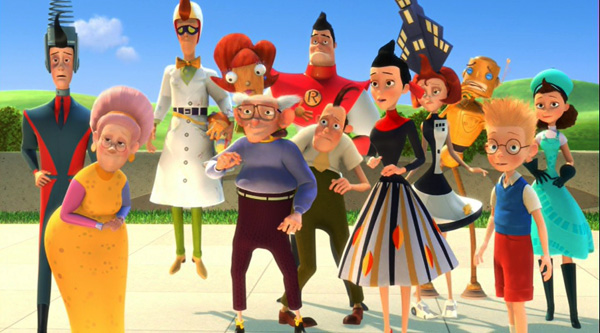 The one thing that I dislike about the animated movie genre is when the makers don’t take it as seriously because the target audience is kids or the fact that the actors don’t really have a shot of being nominated for the academy award. This is the feeling I got while watching this one. All the movies being churned out of Walt Disney studios are not always fantastic but you still got to try. Meet the Robinsons intends to be sweet and almost moving but the script slacks making it just about average.

The movie is about a little boy called Lewis who is raised in an orphanage. He grows up to be a bright kid, always busy inventing new machines but the thing that troubles him is that no one ever is willing to adopt him. Every family he meets, finds him a little too weird for their themselves and saddened by this he gets into his mind to find his birth mother. He decides to make a ‘Brain Scanner’ to help him remember her face. The day he is supposed to showcase the scanner at a Science Fair, a strange boy called Wilbur shows up to warn him about a Bowler hat guy who stole his time machine. And eventually you see the Bowler hat guy who destroys the brain scanner and steals it after that. Why? We don’t know. Wilbur then takes Lewis to the future to make him believe in him, in the process introducing him to his family. The Robinsons.

For most time during the movie, whatever happens on screen has no rhyme or reason. New characters are introduced. Too many characters I’d say. People you won’t remember by the end of the movie. All of it comes together in the end when among other things the mystery of the ‘Bowler hat guy’ is solved. Lewis gets a family and looks forward to the future with a new hope.

The great part of the movie is the family motto of ‘Keep moving forward’ that makes Lewis realise that failure is not the end of the world. That is what the entire movie is based on but it’s done very casually. The time travel is taken too lightly and is quite distracting, especially towards the end when the Bowler hat guy takes the scanner. You watch the time machine being used for almost anything, from importing Dinosaurs from the pre historic times to going to the future to eventually see your wife and kids. It takes away the soul of the movie, which is just about a little boy trying to find a family who would believe in him irrespective of his failures.

The characters are not all interesting. The main lead Lewis (Daniel Hansen/Jordan Fry) is quite bland. He is brainy and a little lost but not at all cute, which he could have been given his looks. The ‘Bowler Hat Guy’ (Stephen Anderson) is kind of mad, vicious and stupid making him interesting to watch. And so is Wilbur’s robot Carl (Harland Williams) who reminds me of Riche Rich’s robotic maid. The direction is the real killer here. Steve Anderson does an average job of directing this time travelling, family drama where the Robinsons don’t get so much time on screen that they deserve considering that they form the title of the movie. The only time that Lewis spends with them is used up to introduce each character and then a dinner which ends up in a fight with a dinosaur. The Bowler hat guy and his story was given a few seconds and a little more emphasis on that would have made the movie more complex and deep, given the history.

Anyway, at the end of the day it is a light, somewhat entertaining movie. The Robinson’s may not be your family but you can surely enjoy watching them with yours.